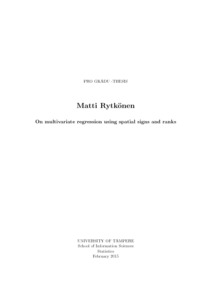 The computational aspects of spatial sign and rank regression were considered. The methods rely on an iterative algorithm, which can fail in certain conditions. Some options to prevent this are tested. Additionally, the algorithm can take a considerable amount of time to calculate, especially in the case of spatial ranks. A faster implementation using the C++ programming language is presented and compared to the original functions available in R.

Then the performance of those methods using a finite sample was compared to asymptotic results in a simulation study. The different methods were used in two different testing problems. In testing problem one if the whole matrix of explaining variables has no effect, and in testing problem two for a split model. When using residuals from the normal distribution, least squares regression was found to be more effective in detecting if the regression co-efficients were different from zero. However, with t-distributed residuals, spatial sign and rank methods appear to be more useful.