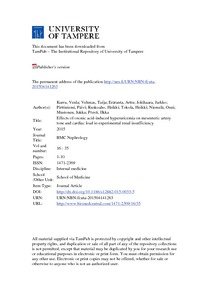 We investigated the influence of hyperuricemia on mesenteric arterial tone (main and second order branch) and morphology in experimental CRI. Forty-four Sprague–Dawley rats were 5/6 nephrectomized (NX) or Sham-operated and fed 2.0% oxonic acid or control diet for 9 weeks.
Results

Oxonic acid feeding elevated plasma uric acid levels 2.4 and 3.6-fold in the NX and Sham groups, respectively. Plasma creatinine and urea were elevated 2-fold and blood pressure increased by 10 mmHg in NX rats, while hyperuricemia did not significantly influence these variables. Right and left ventricular weight, and atrial and B-type natriuretic peptide mRNA content were increased in NX rats, but were not affected by hyperuricemia. In the mesenteric artery, hyperuricemia did not influence vasoconstrictor responses in vitro to norepinephrine or potassium chloride. The small arteries of NX rats featured hypertrophic remodeling independent of uric acid levels: wall to lumen ratio, wall thickness and cross-sectional area were increased without changes in lumen diameter. In the main branch, vasorelaxations to acetylcholine were impaired in NX rats, but were not affected by hyperuricemia. In contrast, relaxations to the large-conductance Ca2+-activated K+-channel (BKCa) opener NS-1619 were reduced by oxonic acid feeding, whereas responses to nitroprusside were not affected.
Conclusions