Targeting the genes of 9p13.3 amplicon in prostate cancer 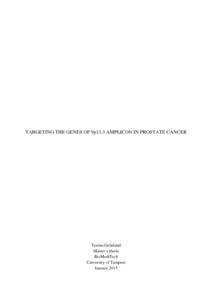 Bioteknologian tutkinto-ohjelma - Degree Programme in Biotechnology
This publication is copyrighted. You may download, display and print it for Your own personal use. Commercial use is prohibited.

Background and aims: Prostate cancer is the most common cancer among men worldwide, and the molecular mechanisms involved in the disease still remain poorly understood. Prostate cancer is commonly associated with genomic copy number alterations that have helped to identify cancer associated target genes. 9p13.3 chromosomal region is recurrently amplified in prostate cancer and associated with the aggressive form of the disease, higher PSA-level, and poor progression-free survival in prostatectomy treated patients. 9p13.3 region may harbor one or more novel oncogenes. NOL6, C9orf23, FANCG, and STOML2 are possible 9p13.3 amplicon target genes that exhibit elevated gene expression in prostate cancer. Our aim was to investigate whether NFX1 and KIF24 genes are also part of this group. The possible effects of target gene silencing on cancer cell proliferation and migration were also studied.

Results: KIF24 exhibited elevated gene expression correlating with increased copy number of 9p13.3 and was therefore selected as putative target gene of the amplicon. The other genes outlined for our study were C9orf23, FANCG, NOL6, and STOML2. Silencing C9orf23 and NOL6 had a negative effect on cancer cell proliferation and migration. On the other hand, FANCG and STOML2 gene silencing had positive effect on cancer cell proliferation.

Conclusion: C9orf23 and NOL6 remain as putative target genes of 9p13.3 amplicon. Further investigations of these genes should be carried out in order to conclude their function and contribution to prostate cancer. FANCG and STOML2 genes remain as possible tumor sup-pressors, and their contribution to cancer needs further clarification. Confirmation of the 9p13.3 amplicon target gene may provide new prognostic or diagnostic marker for prostate cancer in the future.