Change in level of physical activity during pregnancy in obese women: findings from the UPBEAT pilot trial 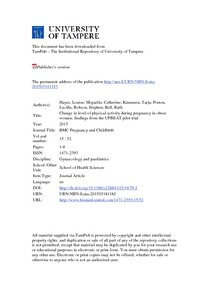 Maternal obesity is associated with an increased risk of pregnancy complications, including gestational diabetes. Physical activity (PA) might improve glucose metabolism and reduce the incidence of gestational diabetes. The purpose of this study was to explore patterns of PA and factors associated with change in PA in obese pregnant women.
Methods

PA in early pregnancy was the factor most strongly associated with PA at later gestations. Women should be encouraged to participate in PA before becoming pregnant and to maintain their activity levels during pregnancy. There is a need for effective interventions, tailored to the needs of individuals and delivered early in pregnancy to support obese women to be sufficiently active during pregnancy.