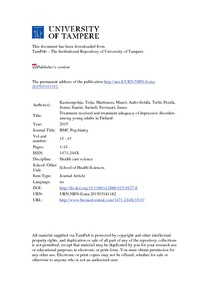 Under-treated depression may be especially harmful in early adulthood. The aims of this study are to describe treatments received for depressive disorders, to define factors associated with treatment adequacy and dropouts from treatment in a Finnish general population sample of young adults.
Methods

A nationally representative two-stage cluster sample of 1894 Finns aged 19 to 34 years was sent a questionnaire containing several mental health screens. All screen positives and a random sample of screen negatives were invited to participate in a mental health assessment including a SCID interview. Case records from mental health treatments for the same sample were obtained for the final diagnostic assessment. Based on all available information, receiving antidepressant pharmacotherapy for at least two months with at least four visits with any type of physician or at least eight sessions of psychotherapy within 12 months or at least four days of hospitalization were regarded as minimally adequate treatment. Treatment dropout was rated if the treatment strategy was assessed to be adequate according to the case records but the patient discontinued the visits.
Results

Of participants with depressive disorders (n = 142), 40.9% received minimally adequate treatment. In multiple logistic regression models, substance use disorder and female gender were associated with at least one visit with a physician, while having major depressive disorder was associated with visits with a physician at least 4 times a year. Women had higher odds of having received any psychotherapy and psychotherapy lasting for at least 8 sessions in a year. Low education and a history of suicide attempt were associated with increased odds of treatment dropout. None of the factors explained the final outcome of minimally adequate treatment.
Conclusions

Treatment adequacy in the present study was better than previously seen, but more efforts are needed to provide adequate treatment for young adults, especially those with low education and suicidality.