It’s Complicated: the Relationship Between GDP and Subjective Well-being 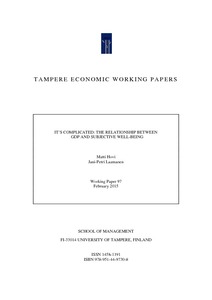 This paper estimates and compares different models of the relationship between output and subjective well-being. New results on how GDP and SWB are interlinked in the short-run and in the long-run are provided. Interpretations of both earlier results and the results obtained in this study are emphasised. Although we only study static models, it appears that the relationships are more complex than acknowledged in earlier studies. In particular, how output is associated with well-being differs between the short-term and the long-term. The variation in subjective well-being coincides with the short-run cyclical fluctuations of output. Moreover, in Europe, economic growth has an independent temporary effect above and beyond its effect on the level of economic output. Our results are consistent with the majority of earlier studies but shed more light on the relationship between GDP and subjective well-being within countries over time.