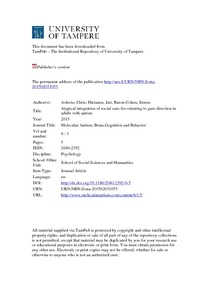 Gaze direction provides important information about social attention, and people tend to reflexively orient in the direction others are gazing. Perceiving the gaze of others relies on the integration of multiple social cues, which include perceptual information related to the eyes, gaze direction, head position, and body orientation of others. Autism spectrum conditions (ASC) are characterised by social and emotional deficits, including atypical gaze behaviour. The social-emotional deficits may emerge from a reliance on perceptual information involving details and features, at the expense of more holistic processing, which includes the integration of features. While people with ASC are often able to physically compute gaze direction and show intact reflexive orienting to others’ gaze, they show deficits in reading mental states from the eyes.
Methods

The present study recruited 23 adult males with a diagnosis of ASC and 23 adult males without ASC as a control group. They were tested using a spatial cuing paradigm involving head and body cues in a photograph of a person followed by a laterally presented target. The task manipulated the orientation of head with respect to body orientation to test subsequent shifts of attention in observers.
Results

The results replicated previous findings showing facilitated shifts of attention by the healthy control participants toward laterally presented targets cued by a congruently rotated head combined with a front view of a body. In contrast, the ASC group showed facilitated orienting to targets when both the head and body were rotated towards the target.
Conclusions

The findings reveal atypical integration of social cues in ASC for orienting of attention. This is suggested to reflect abnormalities in cognitive an