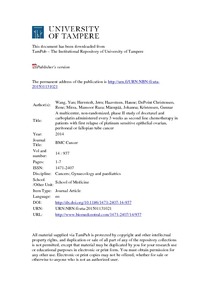 In patients with ovarian cancer relapsing at least 6 months after end of primary treatment, the addition of paclitaxel to platinum treatment has been shown to improve survival but at the cost of significant neuropathy. In the first line setting, the carboplatin-docetaxel combination was as effective as the combination of carboplatin and paclitaxel but with less neurotoxicity. This study was initiated to evaluate the feasibility of carboplatin with docetaxel as second line treatment in patients with ovarian, peritoneal or fallopian tube cancer.
Methods

Patients with stage IC-IV epithelial ovarian, peritoneal or fallopian tube cancer were enrolled at the first relapse after at least 6 months since completion of the first line treatment. Docetaxel 75 mg/m2 was given as an one hour IV infusion followed immediately by carboplatin (AUC = 5) given as a 30–60 min. IV infusion on day 1 and repeated every 3 weeks for 6–9 courses. Primary endpoint was toxicity; secondary endpoints were response rate and the time to progression.
Results

A total of 74 patients were included. Of these, 50 patients received 6 or more cycles, 13 received 3–5 courses and 11 received less than 3 courses. A total of 398 cycles were given. Grade 3/4 neutropenia was seen in 80% (59 of 74) patients with an incidence of febrile neutropenia of 16%. Grade 2/3 sensory peripheral neuropathy occurred in 7% of patients, but no grade 4 sensory peripheral neuropathy was observed. Sixty patients were evaluable for response. The overall response rate was 70% with 28% complete responses in the response evaluable patient population. Median progression-free survival was 12.4 months (95% CI 10.4-14.4).
Conclusions

The three-weekly regimen of docetaxel in combination with carboplatin was feasible and active as second-line treatment of platinum-sensitive ovarian, peritoneal and Fallopian tube cancer. The major toxicity was neutropenia, while the frequency of peripheral neuropathy was low.