Is postpartum depression a homogenous disorder: time of onset, severity, symptoms and hopelessness in relation to the course of depression 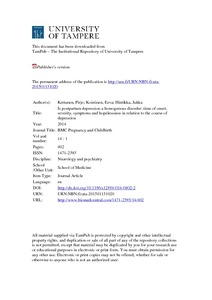 Postpartum depression (PPD) is a common illness, but due to the underlying processes and the diversity of symptoms, some variability is exhibited. The risk of postpartum depression is great if the mother has previously suffered from depression, but there is some evidence that a certain subgroup of women only experience depression during the postpartum period.
Methods

The study group consisted of 104 mothers with postpartum major depression and a control group of 104 postpartum mothers without depression. The Structured Clinical Interview for DSM-IV Axis I Disorders (SCID-I) was used for data collection. The severity of depression and other mental symptoms were assessed using several validated rating scales.
Results

A history of past depression (82%), including depression during pregnancy (42%) and during the postpartum period (53%), was very common in those with current PPD. Eighteen per cent of mothers with current PPD had previously not had any depressive episodes and four per cent had experienced depression only during the postpartum period. Therefore, pure PPD was rare. The onset of PPD was usually (84%) within six weeks of childbirth. Obsessive-compulsive symptoms, phobic anxiety, paranoid ideation, depressed mood, diminished pleasure/interest, decreased energy, and psychomotor agitation/retardation were common with all kinds of depression histories. Pure PPD was the most similar to the first depressive episode. Nevertheless, the severity of depression, the level of hopelessness, somatisation, interpersonal sensitivity, anxiety, hostility, psychoticism, sleep disturbance, and suicidal ideation were lower, appetite changed less, and concentration was better than in other recurrent depressions.
Conclusions

According to this study, PPD is not a homogenous disorder. The time of onset, severity, symptoms, level of hopelessness, and the course of depression vary. Recurrent depression is common. All mothers must be screened during the sixth week postpartum at the latest. Screening alone is not effective; it is also important to give mothers information about PPD and to discuss the symptoms with them in order for them to recognise this disorder and possible new episodes in the future.