How does unemployment affect self-assessed health? A systematic review focusing on subgroup effects 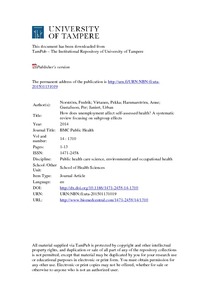 Almost all studies on the effect on health from unemployment have concluded that unemployment is bad for your health. However, only a few review articles have dealt with this relation in recent years, and none of them have focused on the analysis of subgroups such as age, gender, and marital status. The objective of our article is to review how unemployment relates to self-assessed health with a focus on its effect on subgroups.
Methods

A search was performed in Web of Science to find articles that measured the effect on health from unemployment. The selection of articles was limited to those written in English, consisting of original data, and published in 2003 or later. Our definition of health was restricted to self-assessed health. Mortality- and morbidity-related measurements were therefore not included in our analysis. For the 41 articles included, information about health measurements, employment status definitions, other factors included in the statistical analysis, study design (including study population), and statistical method were collected with the aim of analysing the results on both the population and factor level.
Results

Most of the studies in our review showed a negative effect on health from unemployment on a population basis. Results at the factor levels were most common for gender (25 articles), age (11 articles), geographic location (8 articles), and education level (5 articles). The analysis showed that there was a health effect for gender, age, education level, household income, and geographic location. However, this effect differed between studies and no clear pattern on who benefits or suffers more among these groups could be determined. The result instead seemed to depend on the study context. The only clear patterns of association found were for socioeconomic status (manual workers suffer more), reason for unemployment (being unemployed due to health reasons is worse), and social network (a strong network is beneficial).
Conclusions