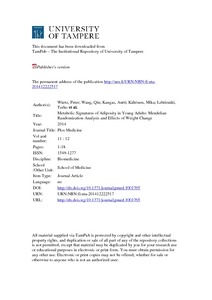 Increased adiposity is linked with higher risk for cardiometabolic diseases. We aimed to determine to what extent elevated body mass index (BMI) within the normal weight range has causal effects on the detailed systemic metabolite profile in early adulthood.
Methods and Findings