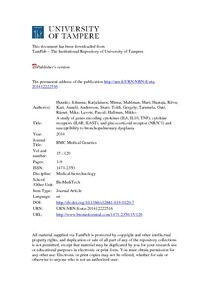 Bronchopulmonary dysplasia (BPD) is a common chronic lung disease associated with very preterm birth. The major risk factors include lung inflammation and lung immaturity. In addition, genetic factors play an important role in susceptibility to moderate-to-severe BPD. In this study, the aim was to investigate whether common polymorphisms of specific genes that are involved in inflammation or differentiation of the lung have influence on BPD susceptibility.
Methods

None of the studied SNPs were associated with BPD nor were the IL6, TNF or IL6ST SNPs associated with cord blood IL-6, TNF and gp130, respectively. However, epistasis analysis suggested that SNPs in IL6ST and IL10 were associated interactively with risk of BPD in the northern Finnish population; however, this finding did not remain significant after correction for multiple testing and the finding was not replicated in the other populations.
Conclusions

We conclude that the analyzed SNPs within IL6, IL6R, IL6ST, IL10, TNF, and NR3C1 were not associated with BPD. Furthermore, there was no evidence that the studied SNPs directly contribute to the cord blood protein contents.