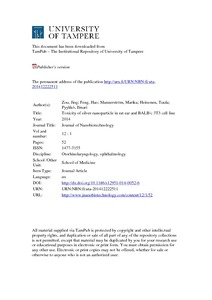 Silver nanoparticles (AgNPs) displayed strong activities in anti-bacterial, anti-viral, and anti-fungal studies and was reportedly efficient in treating otitis media .The potential impact of AgNPs on the inner ear was missing.
Objective

Attempted to evaluate the potential toxicity of AgNPs in the inner ear, middle ear, and external ear canal after transtympanic injection in rats.
Results

In in vitro studies, the IC50 for AgNPs in neutral red uptake assay was lower than that in NAD(P)H-dependent cellular oxidoreductase enzyme assay (WST-1) and higher than that in total cellular ATP and nuclear membrane integrity (propidium iodide) assessments. In in vivo experiments, magnetic resonance imaging (MRI) showed that significant changes in the permeability of biological barriers occurred in the middle ear mucosa, the skin of the external ear canal, and the inner ear at 5 h post-transtympanic injection of AgNPs at concentrations ranging from 20 μg/ml to 4000 μg/ml. The alterations in permeability showed a dosage-response relationship, and were reversible. The auditory brainstem response showed that 4000 μg/ml AgNPs induced hearing loss with partial recovery at 7 d, whereas 20 μg/ml caused reversible hearing loss. The functional change in auditory system was in line with the histology results. In general, the BALB/c 3T3 cell line is more than 1000 times more sensitive than the in vivo studies. Impairment of the mitochondrial function was indicated to be the mechanism of toxicity of AgNPs.
Conclusion

These results suggest that AgNPs caused significant, dose-dependent changes in the permeability of biological barriers in the middle ear mucosa, the skin of the external ear canal, and the inner ear. In general, the BALB/c 3T3 cell line is more than 1000 times more sensitive than the in vivo studies. The rat ear model might be expended to other engineered nanomaterials in nanotoxicology study.