Does provision of targeted health care for the unemployed enhance re-employment? 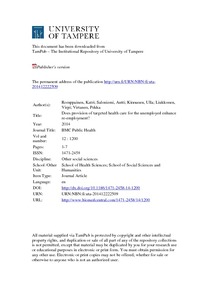 There is increasing pressure to develop services to enhance the health of the workforce on the periphery of the labour market. Health promotion among unemployed people may improve their health but also to increase their employability. We tested whether re-employment can be enhanced with a health care intervention targeted at the unemployed.
Methods

A 3-year follow-up, controlled design was used. The data were collected among unemployed people (n = 539) participating in active labour market policy measures. The baseline survey included established habitually used health questionnaires. The intervention consisted of three health check-ups and on-demand health services. Logistic regression analyses were used to obtain the odds ratios of the intervention group versus control group for being re-employed at follow-up. Health-related differences in the re-employment effects of the intervention were assessed through the significance of the interaction in the regression analyses.
Results

The experimental health service did not show any beneficial effects on re-employment. Nevertheless, rather than considering any particular health care as unnecessary and ineffective, we would like to stress the complexity of providing health services to match the diversity of the unemployed.