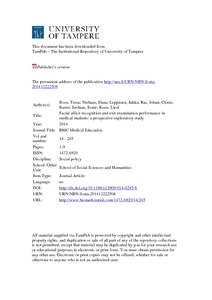 Facial affect recognition (FAR) abilities underpin emotional intelligence (EI). The latter is suggested to predict academic success and to be important for clinician-patient interaction. It is therefore of interest to investigate the possible association between FAR and academic performance in undergraduate medical students.
Methods

We assessed the association between the ability to recognize emotions through facial expression and exit examination performance, a measure of clinical proficiency, in undergraduate medical students stratified by gender at a South African tertiary institution using a prospective descriptive design. Data on the perception of facial expressions and exit examination marks were obtained from 144 (61%) females and 93 (39%) males with a mean age of 24.1 ± 1.6 years. Facial affect recognition measures on the Hexagon and Animation tasks were individually correlated with academic performance indicators using Pearson correlation.
Results

There was no overall correlation between FAR and overall academic performance or with gender. However, subject (specialty) specific findings with recognition of specific emotions and with gender as effect modifier poses interesting questions about EI and FAR and prompts further research into FAR as a useful tool. Being an objective test and offering a more focused assessment makes FAR worthy of further application.