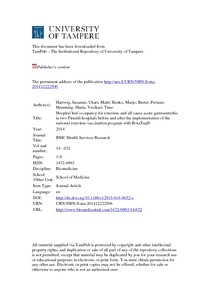 Vaccination-impact studies of the live-attenuated pentavalent oral vaccine Rotateq® have demonstrated that the burden of rotavirus gastroenteritis has been reduced significantly after the introduction of RotaTeq® vaccination, but less is known about the benefit of this vaccination on hospital overcrowding.
Methods

As part of an observational surveillance conducted during the RV seasons 2000/2001 to 2011/2012, we analysed hospital discharge data collected retrospectively from two Finnish hospitals (Oulu and Tampere), concerning ICD 10 codes A00-09 (acute gastroenteritis, AGE) and A08.0 (rotaviral acute gastroenteritis RV AGE). We estimated the reduction in the number of beds occupied and analysed the bed occupancy rate, for RV AGE and all cause AGE, among 0–16 year-old children, before and after the implementation of the RV immunisation program.
Results

The rate of bed days occupied for RV AGE was reduced by 86% (95% CI 66%-94%) in Tampere and 79% (95% CI 47%-92%) in Oulu after RV vaccination implementation. For all cause AGE, reduction was 50% (95% CI 29% to 65%) in Tampere and 70% (95% CI 58% to 79%) in Oulu. Results were similar among 0–2 year-old children. This effect was also observed on overcrowding in both hospitals, with a bed occupancy rate for all cause AGE >25% in only 1% of the time in Tampere and 9% in Oulu after the implementation of the immunisation program, compared to 13% and 48% in the pre-vaccination period respectively. After extrapolation to the whole country, the annual number of prevented hospitalizations for all cause AGE in the post-vaccination period in Finland was estimated at 1,646 and 2,303 admissions for 0–2 and 0–16 year-old children respectively.
Conclusions

This study demonstrated that universal RV vaccination is associated with a clear decrease in the number of bed days and occupancy rates for RV AGE and all cause AGE. Positive consequences include increase in quality of care and a better healthcare management during winter epidemics.