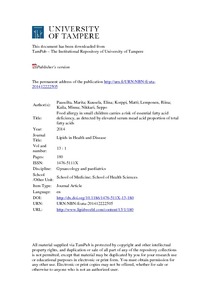 Elevated serum Mead acid as a proportion of total fatty acids is an indirect marker of a deficiency of essential fatty acids (EFA). The aim of the study was to evaluate the symptoms and nutrition of food-allergic children with elevated or normal serum Mead acid.
Methods

Serum fatty acid compositions from 400 children were studied by clinical indications, mostly by suspicion of deficiency of EFA due to inadequate nutrition. A Mead acid level exceeding 0.21% (percentage of total fatty acids) was considered to be a specific sign of an insufficient EFA supply. From a total of 31 children with elevated Mead acid (MEADplus group), 23 (74%) had food allergy. The symptoms and dietary restrictions of this MEADplus group of food allergic children were compared to 54 age-and sex-matched controls with food allergy but normal Mead acid proportions (MEADminus group) before and 6 months after the serum fatty acid determination.
Results

At the beginning of the 6-month follow-up, 44% of the food allergic children in both MEADplus and MEADminus groups were on an elimination diet. These diets did not differ between the two groups and we were not able to document an association between the severity of elimination diet and elevated Mead acid proportion. However, the MEADplus children were on average more symptomatic than MEADminus children. In the MEADplus group, food allergy presented with skin symptoms in 100% (vs. 70% in the MEADminus group, p < 0.001) and with vomiting or diarrhea in 70% (vs. 44% in the MEADminus group, p < 0.05). Clinical suspicion of malnutrition resulted in increase in the use of vegetable oil and milk-free margarine in both groups from <50% to 65-74% during the follow-up. After 6 months, 64% of the MEADplus children with food allergy had been sent to a control serum fatty acid analysis. Of these children, Mead acid had declined to normal level in 69%, and remained elevated in 31%.
Conclusions

Severe symptoms of food allergy combined with elimination diets in children may lead to insufficient nutrition presenting with elevated serum Mead acid. Adding of supplementary polyunsaturated fat to the diet should be considered in these children.