Safeguarding the future: does the African Union have the capacity to protect children in armed conflicts? 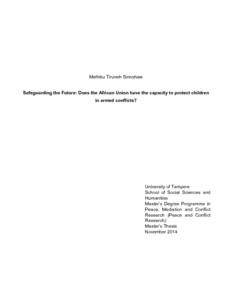 At the time of writing this thesis, there are ongoing armed conflicts in 8 African countries where thousands of children are being killed, maimed, displaced, and abducted into armed groups and in some cases into armed forces to serve as child soldiers, sex slaves, and porters among other roles that violate their rights. Thousands of other children face vulnerabilities in post-conflict situations including lack of basic services and separation from their families. Grave violations of children s rights in armed conflicts are taking place despite many African countries being signatories to international and regional instruments that provide for children s protection in such situations most notably the Convention on the Rights of the Child and the African Charter on the Rights and Welfare of the Child. At the time of writing, the latter has been adopted by 47 out of 54 member states of the African Union (AU) a regional organization that is a major actor in the area of peace and security in Africa and one that has established institutional and legal mechanisms to protect human rights. The aim of this study is to investigate whether the AU has the capacity to protect children in armed conflicts. Given the gravity of the situation in Africa and the fact that children make up about half of the continent s population it seems that addressing this issue is a test of the AU s commitment to ensuring peace and security and protecting human rights. This study attempts to contribute to the dearth of literature on this subject.

Using grounded theory methodology, a theory was developed to address the question of whether the AU has the capacity to protect children in armed conflicts. This was based on coding and analysis of in-depth interviews with key informants who are knowledgeable on the subject - as well as a review of literature particularly on the role played by the African Union (AU) in addressing the problem. The theory developed by this study is that the AU s lack of capacity to protect children in armed conflict is both a manifestation and a product of the issue not being high on its agenda.

This study found that the AU lacks the institutional and structural capacity to protect children in armed conflicts and a determining factor is a lack of political will among many of its member states to deal with the issue. Institutional and structural challenges in the AU that militate against protection of children in armed conflicts being high on its agenda lie in the areas of: setting priorities, structure, resources and capacity, and coordination with other actors.