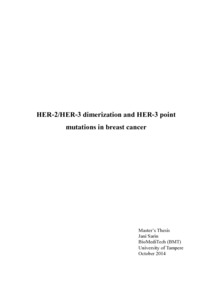 Breast cancer is a common disease and an important cause of mortality in women. Breast cancer has been extensively studied during the last few decades, which has led to the development of potent drugs and to the identification of several breast cancer subtypes. HER-2 positive breast cancer is one of the most well-known subtypes, and drugs which directly target this receptor and inhibit the ligand independent signaling pathways have been developed. Some HER-2 positive breast cancers, however, are insensitive to these drugs, and this has led to the need to develop alternative treatment methods and to find new drug targets. HER-2/HER-3 heterodimers are among the most promising new targets. These dimers activate downstream signaling pathways such as PI3K/Akt, which inhibit apoptosis and promote cell proliferation.

The aims of this thesis were to quantitate the amount of HER-2/HER-3 dimers in twelve breast cancer cell lines and in one gastric cancer cell line using proximity ligation assay technique, to examine do point mutations in the HER-3 receptor affect HER-2/HER-3 dimerization and drug response in vitro, and to determine the prevalence of these mutations in breast cancer using in silico methods.

As expected, HER-2/HER-3 dimers were abundant in most HER-2 positive cell lines, while HER-2 negative cell lines had only a few dimers. Additionally, the addition of pertuzumab, a HER-2/HER-3 dimerization inhibitor, decreased the amount of dimers in most tested cell lines. In vitro drug sensitivity assay confirmed that pertuzumab alone is capable of preventing the growth of most HER-2 positive cell lines. However, despite the abundance of HER-2/HER-3 dimers, SK-BR-3, BT-474, and ZR-75-30 cells were insensitive to pertuzumab. Curiously, in silico evaluation revealed that one of these three cell lines, SK-BR-3, contains a point mutation in the HER-3 receptor, which might explain the observed resistance to pertuzumab. Further in silico study revealed that 1.62% of all breast cancers contain nonsynonymous point mutations in the ERBB3 gene which encodes the HER-3 protein. When considering different cancer subtypes, 3.36% of the 119 HER-2 positive samples studied contained point mutations in ERBB3, while only 1.42% of the 843 HER-2 negative samples contained point mutation in the gene. The fact that HER-2 positive breast cancers contain twice as many point mutations as other breast cancer subtypes is interesting, and therefore the significance of these mutations to the onset and development of HER-2 positive brest cancer should be carefully evaluated in the future. Additionally, it is important to investigate if the pertuzumab resistance of SK-BR-3 cells is caused by the HER-3 point mutation. If this is the case, the presence of HER-3 point mutations should be taken into account when new HER-3 targeted drugs are developed.