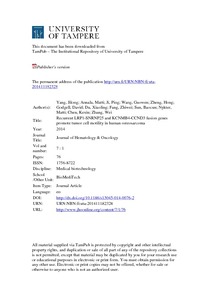 The identification of fusion genes such as SYT-SSX1/SSX2, PAX3-FOXO1, TPM3/TPM4-ALK and EWS-FLI1 in human sarcomas has provided important insight into the diagnosis and targeted therapy of sarcomas. No recurrent fusion has been reported in human osteosarcoma.
Methods

Transcriptome sequencing was used to characterize the gene fusions and mutations in 11 human osteosarcomas.
Results

Nine of 11 samples were found to harbor genetic inactivating alterations in the TP53 pathway. Two recurrent fusion genes associated with the 12q locus, LRP1-SNRNP25 and KCNMB4-CCND3, were identified and validated by RT-PCR, Sanger sequencing and fluorescence in situ hybridization, and were found to be osteosarcoma specific in a validation cohort of 240 other sarcomas. Expression of LRP1-SNRNP25 fusion gene promoted SAOS-2 osteosarcoma cell migration and invasion. Expression of KCNMB4-CCND3 fusion gene promoted SAOS-2 cell migration.
Conclusions