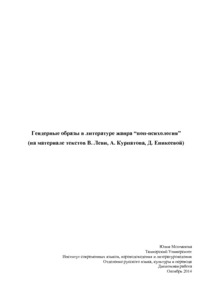 Gender images in “pop psychology” (based on texts of V. Levi, A. Kurptov, D. Enikeeva)

The popularity of "pop psychology"/ "self-help" genre of literature in Russia is undoubtedly growing since 1990's. Though the concept of such genre existed long before 90's, it was known under the name "advice literature". The aim was to teach, guide, give an advice and simple rules how to deal with everyday's life problems. The collapse of the USSR brought new topics to Russian "advice literature" (e.g. personal relationships between man and woman, intimate relations, time and business management). Growth of popularity and demand for this literature turned it to the popular phenomena, which influences lives of people.

Lack of language studies of contemporary "pop psychology"/ "self-help" literature opens us a huge area for research. The aim of this work is to study ways of representing images of men and women in Russian language, especially, usage of gender metaphors and gender stereotypes, as one of possible ways of representing them in literature. For analyses, five works of the three popular Russian authors of "pop psychology" (V. Levi, A. Kurpatov, D. Enikeeva) were chosen. Texts were analysed from both language and cultural point of view.

During analysis of the texts, about 300 gender metaphors were selected. Some of them already became gender stereotypes, when implying certain gender images of men and women. Using comparative and quantitative analysis, selected metaphors were classified based on classification of metaphors by Andrew Goatly, in book "Washing the brain: metaphor and hidden ideology". In the process of study initial classification was extended, considering peculiarities of Russian culture. As a result, gender metaphors were classified using 10 classes suggested in the thesis.