The Increased Risk for Autoimmune Diseases in Patients with Eating Disorders 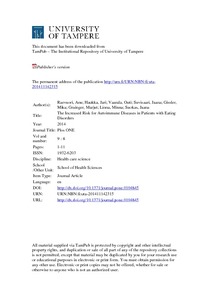 Research suggests autoimmune processes to be involved in psychiatric disorders. We aimed to address the prevalence and incidence of autoimmune diseases in a large Finnish patient cohort with anorexia nervosa, bulimia nervosa, and binge eating disorder.
Methods

Patients (N = 2342) treated at the Eating Disorder Unit of Helsinki University Central Hospital between 1995 and 2010 were compared with general population controls (N = 9368) matched for age, sex, and place of residence. Data of 30 autoimmune diseases from the Hospital Discharge Register from 1969 to 2010 were analyzed using conditional and Poisson regression models.
Results