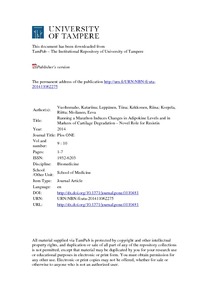 Running a marathon causes strenuous joint loading and increased energy expenditure. Adipokines regulate energy metabolism, but recent studies have indicated that they also exert a role in cartilage degradation in arthritis. Our aim was to investigate the effects of running a marathon on the levels of adipokines and indices of cartilage metabolism. Blood samples were obtained from 46 male marathoners before and after a marathon run. We measured levels of matrix metalloproteinase-3 (MMP-3), cartilage oligomeric protein (COMP) and chitinase 3-like protein 1 (YKL-40) as biomarkers of cartilage turnover and/or damage and plasma concentrations of adipokines adiponectin, leptin and resistin. Mean marathon time was 3:30:46±0:02:46 (h:min:sec). The exertion more than doubled MMP-3 levels and this change correlated negatively with the marathon time (r = –0.448, p = 0.002). YKL-40 levels increased by 56% and the effect on COMP release was variable. Running a marathon increased the levels of resistin and adiponectin, while leptin levels remained unchanged. The marathon-induced changes in resistin levels were positively associated with the changes in MMP-3 (r = 0.382, p = 0.009) and YKL-40 (r = 0.588, p<0.001) and the pre-marathon resistin levels correlated positively with the marathon induced change in YKL-40 (r = 0.386, p = 0.008). The present results show the impact of running a marathon, and possible load frequency, on cartilage metabolism: the faster the marathon was run, the greater was the increase in MMP-3 levels. Further, the results introduce pro-inflammatory adipocytokine resistin as a novel factor, which enhances during marathon race and associates with markers of cartilage degradation.