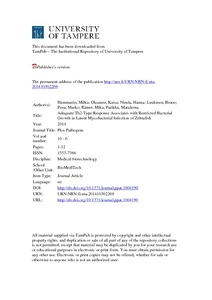 Tuberculosis is still a major health problem worldwide. Currently it is not known what kind of immune responses lead to successful control and clearance of Mycobacterium tuberculosis. This gap in knowledge is reflected by the inability to develop sufficient diagnostic and therapeutic tools to fight tuberculosis. We have used the Mycobacterium marinum infection model in the adult zebrafish and taken advantage of heterogeneity of zebrafish population to dissect the characteristics of adaptive immune responses, some of which are associated with well-controlled latency or bacterial clearance while others with progressive infection. Differences in T cell responses between subpopulations were measured at the transcriptional level. It was discovered that a high total T cell level was usually associated with lower bacterial loads alongside with a T helper 2 (Th2)-type gene expression signature. At late time points, spontaneous reactivation with apparent symptoms was characterized by a low Th2/Th1 marker ratio and a substantial induction of foxp3 reflecting the level of regulatory T cells. Characteristic gata3/tbx21 has potential as a biomarker for the status of mycobacterial disease.