Man, woman or me? Conflicting identities as evidenced by cross-gender name changes 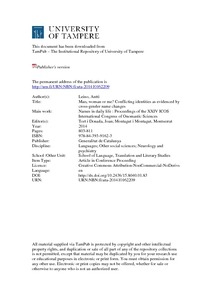 The apparent incidence of transsexuality, and the frequency of gender transition as its primary treatment, has increased in the past couple of decades. This is in large part because the attitudes in several cultures have changed and the social stigma attached to the condition is not quite as severe as in the past. One of the steps in the social, medical and legal process of transitioning from one gender to another is changing one’s name.
The name one has grown up with is typically very closely tied to one’s core identity, and changing it is often not a trivial matter. As most Western personal names are gendered, there may be serious conflicts between, first, one’s personal identity; second, one’s gender identity; and third, the overall goal to fit in as a member of one’s target gender. This paper takes a look at these conflicts and attempts to analyse different strategies for resolving them, mostly in the context of gender transition but also in cases where the name is seen as incongruent with one’s birth assigned sex.