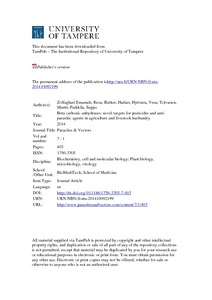 The genomes of many insect and parasite species contain beta carbonic anhydrase (β-CA) protein coding sequences. The lack of β-CA proteins in mammals makes them interesting target proteins for inhibition in treatment of some infectious diseases and pests. Many insects and parasites represent important pests for agriculture and cause enormous economic damage worldwide. Meanwhile, pollution of the environment by old pesticides, emergence of strains resistant to them, and their off-target effects are major challenges for agriculture and society.
METHODS:

In this study, we analyzed a multiple sequence alignment of 31 β-CAs from insects, some parasites, and selected plant species relevant to agriculture and livestock husbandry. Using bioinformatics tools a phylogenetic tree was generated and the subcellular localizations and antigenic sites of each protein were predicted. Structural models for β-CAs of Ancylostoma caninum, Ascaris suum, Trichinella spiralis, and Entamoeba histolytica, were built using Pisum sativum and Mycobacterium tuberculosis β-CAs as templates.
RESULTS:

Six β-CAs of insects and parasites and six β-CAs of plants are predicted to be mitochondrial and chloroplastic, respectively, and thus may be involved in important metabolic functions. All 31 sequences showed the presence of the highly conserved β-CA active site sequence motifs, CXDXR and HXXC (C: cysteine, D: aspartic acid, R: arginine, H: histidine, X: any residue). We discovered that these two motifs are more antigenic than others. Homology models suggested that these motifs are mostly buried and thus not well accessible for recognition by antibodies.
CONCLUSIONS:

The predicted mitochondrial localization of several β-CAs and hidden antigenic epitopes within the protein molecule, suggest that they may not be considered major targets for vaccines. Instead, they are promising candidate enzymes for small-molecule inhibitors which can easily penetrate the cell membrane. Based on current knowledge, we conclude that β-CAs are potential targets for development of small molecule pesticides or anti-parasitic agents with minimal side effects on vertebrates