Time trends in single versus concomitant neck and back pain in finnish adolescents: results from national cross-sectional surveys from 1991 to 2011 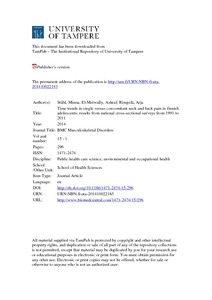 Representative samples of 12 to 18-year-old Finns were sent a questionnaire in 1991, 1999, 2001, 2003, 2005, 2007, 2009 and 2011. Information was gathered about the frequency of neck and low back pain with a six-month recall period. Statistical methods used included descriptive analysis, and generalized linear models.
Results