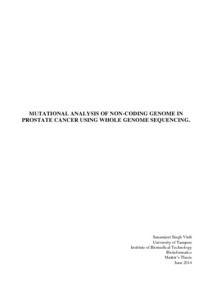 Prostate Cancer is a lethal disease characterized as progressive and possessing distinct molecular heterogeneity during its timespan. Vast number of abnormalities has been reported till now with number of somatic mutations and germline risk factors in addition to rearrangements in the chromatin. All of them together makes the architecture of prostate genome very complex and hard to understand. Transcription machinery is central to gene regulation, with a considerable vacuum in information till date related to abnormalities in the regulatory regions in prostate genome we have tried to explore the non-coding genome and detect mutations in regulatory regions to find if they hold any significance in prostate cancer.

Using prostate cancer sample data from the whole genome sequencing study by Berger et al., 2011 which were seven matched normal-tumor genomes, encouraging results were produced by applying a pipeline of independently selected tools for variant analysis. DNase I hypersensitivity sites (DNaseI HSs) for LNCaP cell lines obtained from The Encyclopedia of DNA Elements (ENCODE) Consortium were used as markers for regulatory region in the genome and from initial 54679 SNVs detected across 7 samples, 21 promoter and 621 enhancer mutations were detected overlapping the DNaseI HS peaks. Out of which 4 and 21 mutations in promoters and enhancers respectively were the finally filtered out whose genes where found relevant directly or indirectly in prostate and other cancers by performing extensive search in the published literature.

For concrete evidence validation would be the next step as results were mere implications, but our study is a diligent effort in delineating the intricate genomics involved in prostate cancer outside the gene coding regions.