Identification of a prognostic signature for old-age mortality by integrating genome-wide transcriptomic data with the conventional predictors: the Vitality 90+ Study 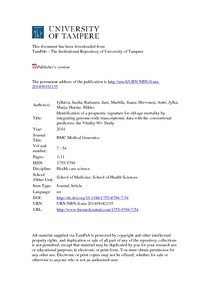 Prediction models for old-age mortality have generally relied upon conventional markers such as plasma-based factors and biophysiological characteristics. However, it is unknown whether the existing markers are able to provide the most relevant information in terms of old-age survival or whether predictions could be improved through the integration of whole-genome expression profiles.
Methods

We assessed the predictive abilities of survival models containing only conventional markers, only gene expression data or both types of data together in a Vitality 90+ study cohort consisting of n = 151 nonagenarians. The all-cause death rate was 32.5% (49 of 151 individuals), and the median follow-up time was 2.55 years.
Results

Three different feature selection models, the penalized Lasso and Ridge regressions and the C-index boosting algorithm, were used to test the genomic data. The Ridge regression model incorporating both the conventional markers and transcripts outperformed the other models. The multivariate Cox regression model was used to adjust for the conventional mortality prediction markers, i.e., the body mass index, frailty index and cell-free DNA level, revealing that 331 transcripts were independently associated with survival. The final mortality-predicting transcriptomic signature derived from the Ridge regression model was mapped to a network that identified nuclear factor kappa beta (NF-κB) as a central node.
Conclusions

Together with the loss of physiological reserves, the transcriptomic predictors centered around NF-κB underscored the role of immunoinflammatory signaling, the control of the DNA damage response and cell cycle, and mitochondrial functions as the key determinants of old-age mortality.