The efficacy of a combination therapy with memantine and an acetylcholinesterase inhibitor in alzheimer's disease: a systematic review and meta-analysis 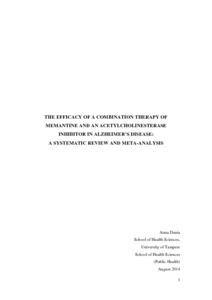 Methods: PubMed, Embase, and Cochrane library databases were searched through December 2013. Seven randomized controlled trials were included in the meta-analysis. A random-effects meta-analysis was used. Heterogeneity and publication bias were assessed.