Mapping of the chromosomal amplification 1p21-22 in bladder cancer 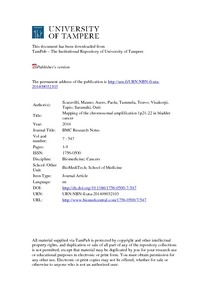 The aim of the study was to characterize a recurrent amplification at chromosomal region 1p21-22 in bladder cancer.
Methods

ArrayCGH (aCGH) was performed to identify DNA copy number variations in 7 clinical samples and 6 bladder cancer cell lines. FISH was used to map the amplicon at 1p21-22 in the cell lines. Gene expression microarrays and qRT-PCR were used to study the expression of putative target genes in the region.
Results

aCGH identified an amplification at 1p21-22 in 10/13 (77%) samples. The minimal region of the amplification was mapped to a region of about 1 Mb in size, containing a total of 11 known genes. The highest amplification was found in SCaBER squamous cell carcinoma cell line. Four genes, TMED5, DR1, RPL5 and EVI5, showed significant overexpression in the SCaBER cell line compared to all the other samples tested. Oncomine database analysis revealed upregulation of DR1 in superficial and infiltrating bladder cancer samples, compared to normal bladder.
Conclusions

In conclusions, we have identified and mapped chromosomal amplification at 1p21-22 in bladder cancer as well as studied the expression of the genes in the region. DR1 was found to be significantly overexpressed in the SCaBER, which is a model of squamous cell carcinoma. However, the overexpression was found also in a published clinical sample cohort of superficial and infiltrating bladder cancers. Further studies with more clinical material are needed to investigate the role of the amplification at 1p21-22.