The role of carbonic anhydrase VI in bitter taste perception: evidence from the Car6 -/- mouse model 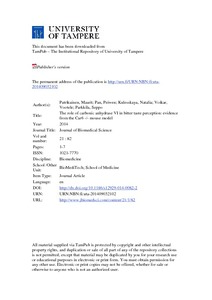 Carbonic anhydrase VI (CA VI) is a secretory isozyme of the α-CA gene family. It is highly expressed in the salivary and mammary glands and secreted into saliva and milk. Although CA VI was first described as a gustatory protein, its exact functional roles have remained enigmatic. Interestingly, polymorphism of the CA6 gene was recently linked to bitter taste perception in humans. In this study, we compared the preference of Car6−/− and wild-type mice for different taste modalities in an IntelliCage monitoring environment. Morphologies of taste buds, tongue papillae, and von Ebner’s glands were evaluated by light microscopy. Cell proliferation and rate of apoptosis in tongue specimens were examined by Ki67 immunostaining and fluorescent DNA fragmentation staining, respectively.
Results

The behavioral follow up of the mice in an IntelliCage system revealed that Car6−/− mice preferred 3 μM quinine (bitter) solution, whereas wild type mice preferred water. When the quinine concentration increased, both groups preferentially selected water. Histological analysis, Ki67 immunostaining and detection of apoptosis did not reveal any significant changes between tongue specimens of the knockout and wild type mice.
Conclusions

Our knockout mouse model confirms that CA VI is involved in bitter taste perception. CA VI may be one of the factors which contribute to avoidance of bitter, potentially harmful, substances.