Exploring Causality between TV Viewing and Weight Change in Young and Middle-Aged Adults. The Cardiovascular Risk in Young Finns Stud 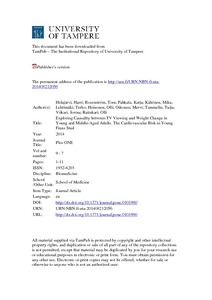 Television viewing time (TV time) is associated with increased weight and obesity, but it is unclear whether this relation is causal.
Methods and Results

We evaluated changes in TV time, waist circumference (waist) and body mass index (BMI) in participants of the population-based Cardiovascular Risk in Young Finns study (761 women, 626 men aged 33–50 years in 2011). Waist and BMI were measured, and TV time was self-reported in 2001, 2007, and 2011. Changes in waist and BMI between 2001 and 2011 were studied a) for the whole group, b) in groups with constantly low (≤1 h/d), moderate (1–3 h/d), or high (≥3 h/d) TV time, and c) in groups with ≥1 hour in-/decrease in daily TV time between 2001 and 2011. BMIs in 1986 were also evaluated. We explored the causal relationship of TV time with waist and BMI by classical temporality criterion and recently introduced causal-discovery algorithms (pairwise causality measures). Both methods supported the hypothesis that TV time is causative to weight gain, and no evidence was found for reverse or bidirectional causality. Constantly low TV time was associated with less pronounced increase in waist and BMI, and waist and BMI increase was lower with decreased TV time (P<0.05). The increase in waist and BMI was at least 2-fold in the high TV time group compared to the low TV time group (P<0.05). Adjustment for age, sex, BMI/waist in 2001, physical activity, energy intake, or smoking did not change the results.
Conclusions