Is socioeconomic status a predictor of mortality in nonagenarians? The vitality 90+ study 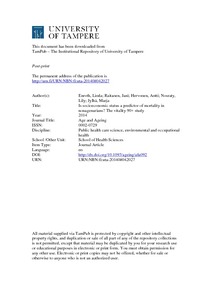 Background
Socioeconomic inequalities in mortality are well-known in middle-aged and younger old adults, but the situation of the oldest old is less clear. The aim of this study was to investigate socioeconomic inequalities for all-cause, cardiovascular and dementia mortality among the people aged 90 or older.
Methods
The data source was a mailed survey in the Vitality 90+ Study (N = 1276) in 2010. The whole cohort of people 90 years or over irrespective of health status or dwelling place in a geographical area was invited to participate. The participation rate was 79%. Socioeconomic status was measured by occupation and education, and health status by functioning and comorbidity. All-cause and cause-specific mortality was followed for three years. The Cox regression, with hazard ratios (HR) and 95% confidence intervals (CI), was applied.
Results
The all-cause and dementia mortality differed by occupational class. Upper non-manuals had lower all-cause mortality than lower non-manuals (HR 1.61 95% CI 1.11-2.32), skilled manual workers (HR 1.56 CI 1.09-2.25), unskilled manual workers (HR 1.88 CI 1.20-2.94), housewives (HR 1.77 CI 1.15-2.71) and those with unknown occupation (HR 2.33 CI 1.41-3.85). Inequalities in all-cause mortality were largely explained by the differences in functioning. The situation was similar according to education but inequalities were not statistically significant. Socioeconomic differences in cardiovascular mortality were not significant.
Conclusions
Socioeconomic inequalities persist in mortality for 90+-year-olds but their magnitude varies depending on the cause of death and the indicator of socioeconomic status. Mainly, mortality differences are explained by differences in functional status.