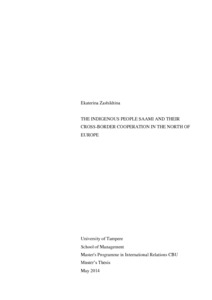 The indigenous people Saami have very special distinctive feature - they live on the territories of four states: Norway, Sweden, Finland and Russia. Nowadays they enjoy all rights, which were given to them after decades of assimilation policy and mistreatment, therefore current Saami policy of Nordic states is a vivid example of good implementation of the multiculturalism. Cross-border cooperation of the Saami in political and other spheres highlights their common culture, history and goals. Such interaction between them across national borders leads not only to developments at the international level, but also influences the Saami policies within the states.

This thesis analyzes current national Saami policies of Nordic states, consequences of the Saami people cooperation across borders of the states and the unifying factors, which form the basis of such cooperation process. Therefore the main object of the research is the ways of cooperation between the Saami from different countries. To examine this object I apply mostly the comparative method, because each Nordic country has its own historical background of relations with the Saami, individual current policy regarding indigenous peoples and therefore the extent of participation of the Saami from every country in a common cooperation depends on these above-mentioned factors.

The basis for this analysis includes first of all the documents (declarations, agreements, draft convention), which were created and ratified by the Saami people of all Nordic states and also documents (constitutions, national acts and political parties programs), which are referred to the national law regarding the Saami rights on the territory of each state individually. The documents of the UN regarding all indigenous peoples in general and their rights play a very important role as well, because they constitute the foundation for the national legislation and hence influence the Saami policy of each of these states. The data collection consists of all these documents and also other surveys and researches.

Cross-border cooperation of this indigenous people has many significant consequences for the indigenous movement around the world in general and for development of the Saami rights in every Nordic state in particular. Even nowadays when they achieved great results in developing of their rights and joint cooperation in political sphere, it s still important for them to maintain their cooperation in basic for them spheres, like culture and traditional livelihoods, which undoubtedly constitute the foundation for any other kind of cooperation. In a broader context the Saami movement and results of their cooperation can influence other indigenous peoples in the world to struggle for their rights, especially the ones who are separated by the frontiers of different states.