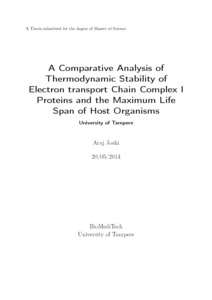 Background and Aims: "Mitochondrial theory of ageing" is an established theory which states that there is a correlation between Maximum Life Span (MLSP) of an organism and its mitochondrial free radical production. Here we are trying to extend this theory to determine if there is a correlation between stability of Complex I proteins of the electron transport chain (ETC) and MLSP. Through this we want to establish if there are Complex I proteins which might be involved in ageing of organisms. We selected Complex I because it is the first complex of the ETC and ETC is located in the mitochondria (free radical damage is the maximum in mitochondria as per the free radical theory of ageing).

Methods: Downloaded orthologs for all the 45 proteins of Complex I and used I-mutant program to find the stability of proteins after mutation. We applied all possible mutations at each site of the protein and then applied various methods to establish the change in protein stability which tells us whether the protein becomes more stable or less stable after the mutations. We then used the stability value and MLSP to find if there is a correlation (Spearman's Rho) between protein stability and MLSP and for the significance of the result, we find p-value corresponding to each Rho.

Conclusion: Since there is a significant correlation between protein stability and MLSP for 19 out of 45 proteins, we can say that these proteins of Complex I might have some role in the process of ageing of organisms.