The invisibility of men's practices: A discourse analysis of gender in domestic violence policy 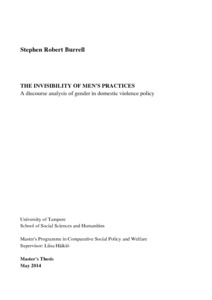 MDP in Comparative Social Policy and Welfare
This publication is copyrighted. You may download, display and print it for Your own personal use. Commercial use is prohibited.

Domestic violence is a phenomenon which is both gendered and social, in that it is perpetrated overwhelmingly by men against women, and is pervasive throughout all areas of society. Yet the history of the response to domestic violence by the state has often been one of inaction and failure. This master's thesis explores how the governments of Finland and the United Kingdom approach the issue today, by examining how policy around domestic violence is discursively gendered, constructed, and problematised. This is carried out through an analysis of two national policy documents from each country, published between 2008 and 2011, which focus on domestic violence or violence against women more broadly. These texts are studied by a combination of discourse analysis methods and a problematisation approach to policy analysis. The UK and Finland were chosen for comparison because of the different ways in which feminists have traditionally interacted with the state in the two countries. In Britain, feminists have theorised the state as being inherently patriarchal and their struggle has therefore often been oriented 'outside' of the state. In Finland meanwhile, the more consensus-oriented nature of welfare state development has meant that feminists have viewed the state more benignly, and have been more willing to work 'inside' its apparatus. This research investigates whether this traditional contrast between the two countries is apparent in their contemporary policy discourses.

It was found that, in all four of the policy documents, men's practices are almost entirely invisible and unproblematised, and that the discourse is instead centred around the victimhood of women. The violence of men, and its underlying causes, is not engaged with, and is routinely concealed through the use of agentless language. Where men's practices are referred to, they are often degendered, through a gender-neutral discourse which obfuscates the patriarchal dynamics of domestic violence. In this representation of the problem, a deafening silence surrounds men's responsibility for domestic violence. With the focus limited only to the victims, the phenomenon is instead represented as being a problem of women, and women are thus denoted with the onus of responsibility for stopping and preventing men's violence. A fundamental transformation away from this representation of domestic violence is therefore advocated, based on the problematisation of men's practices and the gendered power relations which underpin them, as a vital part of efforts to prevent men from ever choosing to use violence in the first place. This demonstrates that there is an urgent need for further research into primary prevention work and how the norms, assumptions, and ideas which fuel men's violence can be tackled. Furthermore, confronting the practices of men means fundamentally challenging the structures of the patriarchal system, which is itself an essential step in tackling domestic violence.