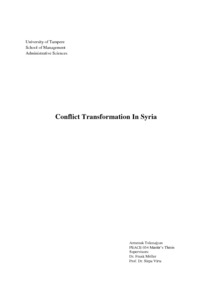 After the onset of the Syrian conflict in late 2011, the concept of “civil war” has become commonly used to describe the situation in Syria. Over time, new actors, of foreign as well as local origins, have joined the conflict, and thereby fundamentally changed some of its defining characteristics. As the complexity of the conflict has grown, identifying the specifications of the conflict has become arduous. This thesis contributes to the understanding of the type of the conflict in Syria between March 2011, when the first protests began, and late summer 2013.

The aim of this thesis is to investigate whether the two most dominant conflict databases, the Correlates of War (COW) Project and the Uppsala Conflict Data Program/Peace Research Institute, Oslo (UCDP/PRIO), and their respective conflict typologies, can identify the type of the conflict in Syria.

The databases provide a typological overview of hundreds of conflicts. This indicates that they should also be able to explain the type of the conflict in Syria. To test the ability of the databases, this thesis adopts the “most likely test case” approach, which is one of the approaches of single case study methodology. This particular approach suggests that the frameworks of the databases should be able to explain the chosen case; if they are not able to do so, then their validity would be lessened.

The study paves the way for further research about the Syrian conflict, especially since the war continued to be active at the time that this thesis was finalized. Despite the internality of the conflict, it has become increasingly internationalized, which raises challenges for COW and UCDP/PRIO in identifying it adequately according to their current typologies. In addition to these main findings, the case study has also revealed some vulnerabilities regarding the databases’ coding rules for internationalized civil wars.