The European Union as an actor in international relations : a case-study of the legislation development on the common immigration and asylum policy 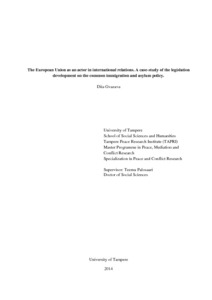 The European Union has been becoming one of the most prominent actors in the contemporary international relations. The emergence of a phenomenon which does not fall into traditional explanatory models triggered the vast number of the researches trying to provide the explanation of the EU actorness and international identity. In the academic field there is a fierce debate over the nature and the future of the European Union as a player at the international arena.

The goal of this research is to contribute to the comprehending of the European Union as an international actor through singling out its peculiarities and probing various theories explaining the EU actorness. The research is based on the case-study of the common policy development in the field of immigration and asylum. The study is conducted at the level of the legislation analysis in order to simplify the research and draw conclusions which can question or support some of the existing explanations of the EU actorness.

The research applies the methodology developed by Jef Huysmans in the framework of the theory of securitisation. The set of analytical tools is used in order to make the analysis of the vast number of different documents feasible and productive.

The research is designed the way that it is not supposed to provide the ultimate definition of the EU actorness but rather contribute to the academic debated over the nature of the European Union as an actor in international relations.

The research proves that the existing theories aimed at explaining the Union’s role and nature are applicable to certain extend and manage to provide valid conclusions concerning some aspects of the European Union policies but they all have the limitations. Therefore, the multi-causal approach to the study of the EU’s actorness is the most appropriate.