The European Union as a normative non-proliferation actor : "Normative Power Europe" and the case of India 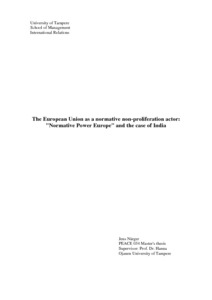 Due to the fact that Manners utilises case-study methodology in order to prove the concept of 'Normative Power Europe', further case studies in various foreign policy fields lend themselves to verify or falsify the theoretical claims around the concept. In accordance to this, the research of this thesis aims to test Manners' notion by conducting a case study in the policy field of non-proliferation of Weapons of Mass Destruction and related material.

In order to do so, firstly a theoretical subsumption of Manners' concept of 'Normative Power Europe' is conducted, which includes normative foreign policy analysis as well as role theory.

By means of these theoretical tenets as an explanatory framework, the research of this thesis suggests that role conflicts within the EU's non-proliferation policy actions emerge frequently, which undermines consistent action of the EU in this policy field. This can be understood in terms of non-adherence to self-set normative foreign policy goals: The research of this thesis suggests that the EU's goals and actions in non-proliferation do not correspond sufficiently. Furthermore, in this thesis, these roleconflicts are exemplified by a case study on the EU's non-proliferation policy towards India, in which non-proliferation goals have been abandoned in favour of economically defined goals. By means of the results from the analysis of existing data and the conducted case study, Manners' theoretical notion of 'Normative Power Europe' has been refuted. Accordingly, in the light of the available data and the conducted case study, the EU cannot be regarded as a consistent normative foreign policy actor in the policy field of non-proliferation.