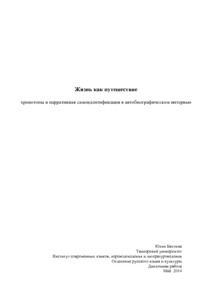 This thesis studies the narrative interview of an Ingrian woman, who was evacuated to Finland with her family as thousands of other Ingrian Finns during the Second World War, according to the agreement between Finnish and German authorities. However, in 1945 the government of the USSR demanded return of those soviet citizens back to the Soviet Union, where they would live in Siberia or other places of the Soviet Russia without any right to go back to the places of their origins or leave the country. Therefore, tens of thousands Ingrian Finns who survived the WWII had to survive also the life in exile.

The problematic of Ingrian Finns has been studied by different scientists from a variety of academic fields. This thesis makes an attempt to find out how the interviewee shapes her identity and constructs spaces and chronotopes during the process of narration, what kind of interconnection is there between the categories identification and space in the autobiographical interview.

This research is constructed as a case study design. In order to understand remigrant woman s sense of identity and space gender approach is combined with cultural studies perspective in addition to sociological framework. By using narrative analysis this study tries to investigate which meanings in the text of the autobiographical interview emphasize the significance of some events and periods of time in the participant s life. What kind of events are there as a background on which the respondent shapes her identity and constructs spaces? How the narrator creates places and what are their meanings? These and some other questions arise here during the research. Hence, this study makes an attempt to define and deeply analyze the key concepts and events chosen by the respondent in her story-telling that play essential part in the process of identification and the construction of space in narrative.

As a kind of discourse, narrative involves a dialogue about the variety of perceptions and understandings of the world. It has been an absolute privilege to be able to take a part in a life journey of the person who is willing to share her own understanding of the world and the way she makes sense of life. This kind of life experience makes the study unique and valuable by offering different perspectives on identity and space research.