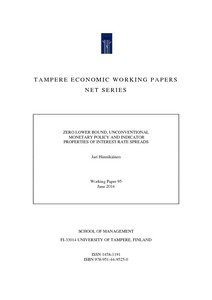 This paper re-examines the out-of-sample predictive power of interest rate
spreads when the short-term nominal rates have been stuck at the zero lower
bound and the Fed has used unconventional monetary policy. Our results suggest
that the predictive power of some interest rate spreads have changed since
the beginning of this period. In particular, the term spread has been a useful
leading indicator since December 2008, but not before that. Credit spreads
generally perform poorly in the zero lower bound and unconventional monetary
policy period. However, the mortgage spread has been a robust predictor of economic activity over the 2003–2014 period.