Proportional representation reinvented: A study on the concept and applications of the Electoral Region model 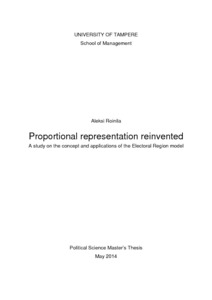 This paper studies three novel electoral systems and the concept of the electoral region on which they are all founded upon. The electoral region is a concept that preserves traditionally independent electoral districts but allows them to influence each other s voting results in order to generate greater proportionality in the overall election result.

Using Finland s parliamentary elections of 2007 as a test case, this paper proves that the electoral region concept allows a degree of proportionality that is either on par with or greater than in any earlier system of proportional representation. As the three electoral systems presented demonstrate, this unmatched level of proportionality is achievable with a method that is far simpler than the multi-tiered systems that have thus far been required for achieving similar levels of proportionality in multi-district elections; Two of the three electoral systems introduced in this paper utilize only one electoral formula in their seat distribution from the national level down to the districts the widely adopted d Hondt formula and in all three the voter is only expected to cast a single vote in favor of a single candidate and party.