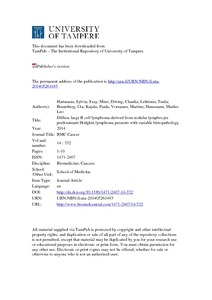 Nodular lymphocyte predominant Hodgkin lymphoma (NLPHL) usually presents in middle aged men and shows an indolent clinical behavior. However, up to 30% of the patients present a secondary transformation into aggressive diffuse large B cell lymphoma (DLBCL). The aim of the present study was to characterize morphology and immunophenotype of this kind of DLBCL in detail and compare it with conventional DLBCL.
Methods

Morphology and immunophenotype of 33 cases of NLPHL with simultaneous or sequential transformation into DLBCL were investigated. These cases were compared with 41 de novo DLBCL in Finnish men.
Results

The morphology and immunophenotype of DLBCL arisen from NLPHL is heterogeneous. Further characterization of the particular molecular features of this subgroup is warranted to be able to better identify these cases among conventional DLBCL.