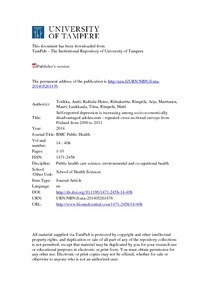 Adolescent depression is more common in lower socio-economic groups. Whether this pattern has changed over time, is not known.

We examined the prevalence of self-reported depression and its changes in socio-economic groups from 2000 to 2011 among Finnish adolescents.
Methods

Data were based on classroom surveys every second year from 2000–2001 to 2010–2011 using nationwide samples of 14–16-year old Finns (n = 618,084). Data were collected using self-administered questionnaires including questions on health, health behaviours, and school experiences. Depression was measured with a Finnish modification of the 13-item Beck Depression Inventory, and divided into no, mild, moderate and severe depression. The association between depression and the social background (parents’ education and employment) over time was studied using a multinomial regression analysis.
Results

The prevalence of self-reported severe depression slightly increased from 2000–2001 to 2010–2011 in girls. In boys a slight increase was observed when adjusting for background variables. The differences in the prevalence of depression between the social background groups persisted over the entire study period. In both sexes, severe depression nearly doubled among those adolescents whose parents were unemployed and had a low education level; among boys, the prevalence was 6.5% in 2000–2001 and 12.8% in 2010–2011, and among girls 6.4% and 11.4% respectively.
Conclusion

The largest increases in prevalence of severe depression are seen among socio-economically disadvantaged adolescents. This suggests that inequalities in mental health may become an increasing concern.