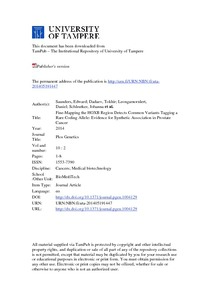 The HOXB13 gene has been implicated in prostate cancer (PrCa) susceptibility. We performed a high resolution fine-mapping analysis to comprehensively evaluate the association between common genetic variation across the HOXB genetic locus at 17q21 and PrCa risk. This involved genotyping 700 SNPs using a custom Illumina iSelect array (iCOGS) followed by imputation of 3195 SNPs in 20,440 PrCa cases and 21,469 controls in The PRACTICAL consortium. We identified a cluster of highly correlated common variants situated within or closely upstream of HOXB13 that were significantly associated with PrCa risk, described by rs117576373 (OR 1.30, P = 2.62×10−14). Additional genotyping, conditional regression and haplotype analyses indicated that the newly identified common variants tag a rare, partially correlated coding variant in the HOXB13 gene (G84E, rs138213197), which has been identified recently as a moderate penetrance PrCa susceptibility allele. The potential for GWAS associations detected through common SNPs to be driven by rare causal variants with higher relative risks has long been proposed; however, to our knowledge this is the first experimental evidence for this phenomenon of synthetic association contributing to cancer susceptibility.