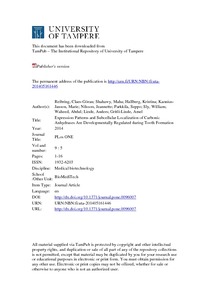 Carbonic anhydrases (CAs) play fundamental roles in several physiological events, and emerging evidence points at their involvement in an array of disorders, including cancer. The expression of CAs in the different cells of teeth is unknown, let alone their expression patterns during odontogenesis. As a first step towards understanding the role of CAs during odontogenesis, we used immunohistochemistry, histochemistry and in situ hybridization to reveal hitherto unknown dynamic distribution patterns of eight CAs in mice. The most salient findings include expression of CAII/Car2 not only in maturation-stage ameloblasts (MA) but also in the papillary layer, dental papilla mesenchyme, odontoblasts and the epithelial rests of Malassez. We uncovered that the latter form lace-like networks around incisors; hitherto these have been known to occur only in molars. All CAs studied were produced by MA, however CAIV, CAIX and CARPXI proteins were distinctly enriched in the ruffled membrane of the ruffled MA but exhibited a homogeneous distribution in smooth-ended MA. While CAIV, CAVI/Car6, CAIX, CARPXI and CAXIV were produced by all odontoblasts, CAIII distribution displayed a striking asymmetry, in that it was virtually confined to odontoblasts in the root of molars and root analog of incisors. Remarkably, from initiation until near completion of odontogenesis and in several other tissues, CAXIII localized mainly in intracellular punctae/vesicles that we show to overlap with LAMP-1- and LAMP-2-positive vesicles, suggesting that CAXIII localizes within lysosomes. We showed that expression of CAs in developing teeth is not confined to cells involved in biomineralization, pointing at their participation in other biological events. Finally, we uncovered novel sites of CA expression, including the developing brain and eye, the olfactory epithelium, melanoblasts, tongue, notochord, nucleus pulposus and sebaceous glands. Our study provides important information for future single or multiple gene targeting strategies aiming at deciphering the function of CAs during odontogenesis.