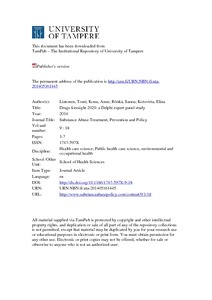 Historically substance misuse has been relatively common in western countries, but comparatively few Finns report drug use. The Drugs 2020 study aimed at foreseeing changes in the drug situation in Finland by the year 2020.
Methods

The Delphi method was used, utilizing drug experts of the EU national network in Finland.
Results

Marked growth was foreseen in drug use, especially in synthetic designer drugs and misuse of medicinal drugs. Significant increase was also expected in growing cannabis at home. However, the control of drug market was expected to shift more into the hands of organized crime. No consensus was reached on how drug prices will develop in the time period. Drug use is likely to remain punishable although the use and possession of cannabis may be treated less severely. It seems likely that health and social services resources will be directed towards medicinal treatment.
Conclusions

Foresight can be utilized in preparing for the future; desirable developments can be fostered, and measures can be taken to curb probable but undesirable lines of development. Based on the results of this study, the experts’ view is that it is highly likely that the Finnish society will have to prepare for an increase in the demand for drug-related care, both in terms of content of the care and financing the services. Also, the forecasted increase in the role of legal prescription medicine used as intoxicants will call for efforts not only in changing prescription practices but in border and police control measures, as well. Parallel developments have been foreseen in the UK and Sweden, and it is likely that similar trends will actualize also in other western countries.