BEAC is what states make of it: cooperation in the Barents Euro-Arctic Council from a constructivist viewpoint 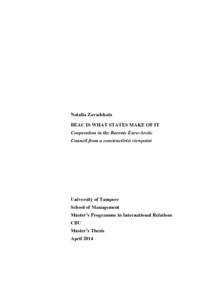 This thesis will inquire into the Barents Euro-Arctic Council (BEAC) from a constructivist viewpoint. The title is inspired by Alexander Wendt s famous phrasing Anarchy is what states make of it and is reframed to the Barents cooperation is what states make of it . The aim is to show how identities and common norms embedded in the social culture of the Barents cooperation affect actors interests and their behavior. The point of departure is that self-image and identity will shape norms and states interests, based on a notion that they operate in a social context of international relations. In my thesis, I will study how states view their own role in this cooperation, how they perceive each other and the region and which norms are brought to the fore. I will also try to find out which norms are shared and how they are internalized. The hypothesis is that there is a certain degree of identification by members of the Barents cooperation with the region and that it plays a significant role in their self-image. There should also exist some shared norms and values, which members of the group consider legitimate and are willing to project in cooperation with their counterparts. The theoretical framework of the current study is based on constructivism in IR, as presented mainly by Onuf and Wendt, as well as regime studies. Constructivism plays a part in explaining the role of identity and norms in the Barents cooperation; the theory of international regimes is used to put cooperation in its present context and to explain for the process of learning, knowledge sharing and norms internalization. The methodological basis of the study is the Qualitative Content Analysis and the Theory of Speech Acts. Applying these methods I will analyze BEAC documents, as well as speeches of official representatives of Norway, Russia, Finland, Sweden, Iceland, Denmark and the EU. Availability of speeches delivered by politicians in relation to the involvement of their countries in the Barents cooperation at different times will allow making a comparison of how interests and identities of actors have changed for 20 years of cooperation. The thesis does not intend to cover the actual implementation of different Barents policies and give a positivist truth on whether this cooperation is effective or not, but it rather makes an attempt to look at how ideas matter in international politics and thus to support the theory of constructivism in IR by applying it to a particular example of international relations cooperation in the BEAC.