The global as a field: children's rights advocacy as a transnational practice 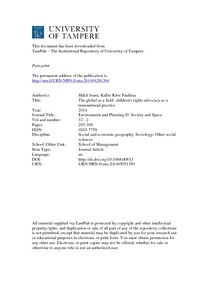 Research on transnationalism has called into question the much criticized but persistent dichotomy between the nation-state space as an ‘inside’, and the global realm as its constitutive ‘outside’. This paper contributes to the emerging scholarship on transnational elites working at the intersection of the national and the global by assessing practices related to children's rights advocacy. Particular attention is paid to the drafting and the enforcement of the United Nations Convention on the Rights of the Child since the 1980s. Based on Bourdieuan theorization of social fields the paper argues that some aspects in the children's rights advocacy can only be understood as reflecting the dynamism of the transnational field of children's rights. In somewhat broader terms the paper proposes that the formative logic of elite-driven globalization is a social and political dynamism related to the rules of competition and collaboration that structure inclusions, exclusions and awards in transnational fields.